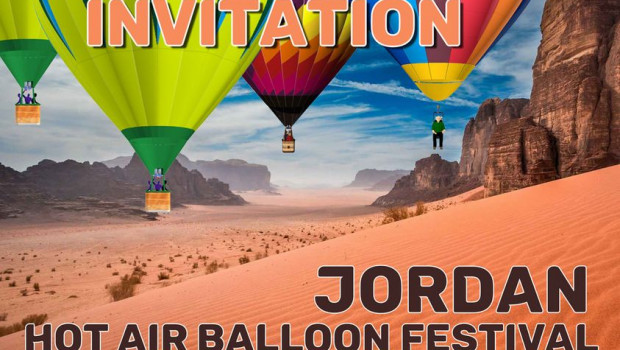 We at JHF are launching the First Hot Air Balloon Festival in Jordan, the first of its kind in Jordan and the region. The Festival will be held from the 1st – 5th October 2021, and will be taking place in Jordan’s golden triangle (Wadi Rum, Petra and Aqaba) – an area that is declared “green” (free of COVID measures) by the Jordanian Government.
The Festival is set to have multiple events:
1. Hot Air Balloons related events:
• Hot Air Balloon rides.
• Witnessing the preparations of the balloons on the ground.
• Balloon glow in the magical scenes of Wadi Rum and Petra.
2. Other events including but not limited to:
• Army parachute show.
• Outdoor cinema to screen movies that were filmed in Wadi Rum.
• Music events.
• Kids Educational and Entertainment Center
• On-site DJ.
• Traditional Bedouin shows.
• Traditional Jordanian food.
• Show about the Hejaz Train and Railway.
• Airshow by the Royal Jordanian Falcons.
• Skydiving performances by Jordanian Armed Forces/ Special Forces.
• Performances by the Jordanian Armed Forces Band.
With support of the office of the Crown Prince and the support of Ministry of tourism, the Jordanian tourism board and Aqaba special economic zone authority we are able to invite international balloon teams to take part in the event.